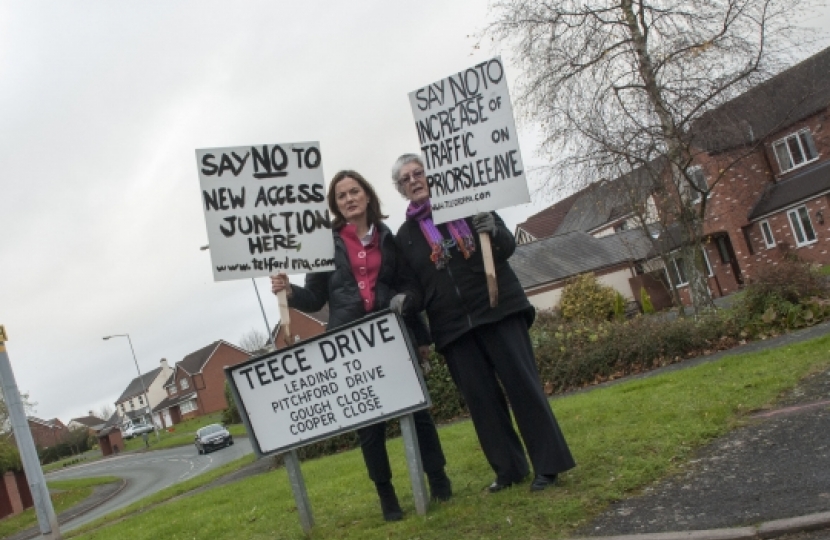 Telford & Wrekin Council’s decision to give planning permission to a controversial faith academy and to a travellers’ site in Snedshill will have a major impact on the quality of life for residents, a local councilor tells Lucy Allan, Prospective MP for Telford.

Veronica Fletcher, Councillor for Priorslee, who has always welcomed the new school, is concerned that the siting of the access to the new Holy Trinity Academy in Priorslee will create a dangerous increase in traffic.

Cllr Fletcher told the Council’s Planning Committee on Wednesday 4th December, that traffic on the road is a “nightmare” already – with a factory, a primary school and a supermarket all on the proposed access route to the school causing traffic woes for residents.

The 900-pupil Faith Academy will use narrow Teece Drive as the primary route in and out of the school. Cllr Fletcher says that access to the school should be from Castle Farm Way, a main road nearby.

At the same meeting the Plans Board also approved the siting of a Travellers’ Transit Site on Symonds Yard, Snedshill, Telford.

Cllr Fletcher told the Plans Board that whilst a statutory duty exists to provide sites for travellers and gypsies the Council must comply with CTAAP (Central Telford Area Action Plan) and NPPF and this siting was in breach of both.

She told the Board the Council had no authority to change the use, as was being proposed. She drew the Plans Board’s attention to the 260 objections received by local residents and businesses.

Despite objections the Plans Board approved both applications.

Cllr Fletcher said: "The majority of the Planning Committee has ridden roughshod over the views of the local people and failed to prioritise the interests of and effects on the residents"

Cllr Fletcher showed local campaigner and prospective MP for Telford, Lucy Allan around both sites to explain the impact on the area.

Lucy Allan said: “Priorslee residents are frustrated by the Council’s failure to listen to their concerns on these two major issues.”

“I recognise a traveller’s site is necessary to prevent illegal camps but it is essential it is situated in the right place. People come to Telford because it offers a great quality of life.”

“This site is a gateway to Telford and was supposed to be for an iconic development. This opportunity has been lost. Cllr Fletcher is a champion of local people and has worked tirelessly to ensure their voice has been heard.”